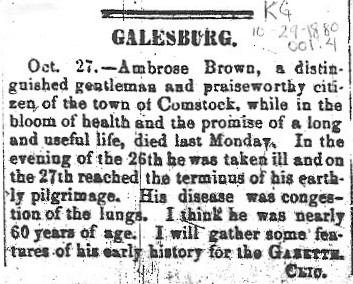 Galesburg Oct. 27 – Ambrose Brown, a distinguished gentleman and praiseworthy citizen of the town of Comstock, while in the bloom of health and the promise of a long and useful life, died last Monday. In the evening of the 26th he was taken ill and on the 27th reached the terminus of his earthly pilgrimage. His disease was congestion of the lungs. I think he was nearly 60 years of age. I will gather some features of his early history for the GAZETTE.

From the Saturday, October 30, 1880 Galesburg Express: 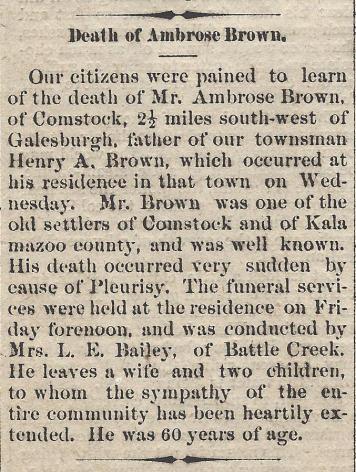 DEATH OF AMBROSE BROWN
Our citizens were pained to learn of the death of Mr. Ambrose Brown, of Comstock 2-1/2 miles south-west of Galesburgh, father of our townsman, Henry A. Brown, which occurred at his residence in that town on Wednesday. Mr. Brown was one of the old settlers of Comstock and of Kalamazoo County, and was well known. His death occurred very sudden by cause of Pleurisy. The funeral service was held at the residence on Friday forenoon, and was conducted by Mrs. L. E. Bailey of Battle Creek. He leaves a wife and two children, to whom the sympathy of the entire community has been heartily extended. He was 60 years of age.

From the November 2, 1880 Kalamazoo Gazette: 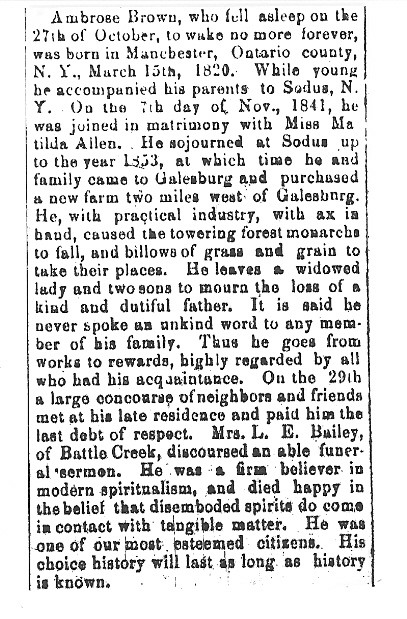 Ambrose Brown, who fell asleep on the 27th of October, to wake no more forever, was born in Manchester, Ontario County, N.Y., March 15, 1820. While young he accompanied his parents to Sodus, N.Y. On the 7th day of November, 1841, he was joined in matrimony with Miss Matilda Allen. He sojourned at Sodus up to the year 1853, at which time he and family came to Galesburg and purchased a new farm two miles west of Galesburg. He, with practical industry, with ax in hand, caused the towering forest monarchs to fall, and billows of grass and grain to take their places. He leaves a widowed lady and two sons to mourn the loss of a kind and dutiful father. It is said he never spoke an unkind word to any member of his family. Thus he goes from works to rewards, highly regarded by all who had his acquaintance. On the 29th a large concourse of neighbors and friends met at his late residence and paid him the last debt of respect. Mrs. L. E. Bailey, of Battle Creek, discoursed an able funeral sermon. He was a firm believer in modern spiritualism, and died happy in the belief that disembodied spirits do come in contact with tangible matter. He was one of our most esteemed citizens. His choice history will last as long as history is known.

Ambrose was buried in Ford’s Hill Cemetery in Comstock Township, Michigan. A letter from Granddaughter Lela (Brown) Mueller to Warren Atkins dated October 27, 1958, mentioned, “There is no road leading to the old Cemetery so the younger ones went through brush etc. to go there. Our stones were down, it will soon be forgotten as there is no road.” According to Michigan relatives, the cemetery now has a highway running through the center of it and is terribly overgrown and sprinkled with poison ivy, making it impossible to find any tombstones. Years ago, Dorothy (Recoschewitz/Brown) Langmayer visited the cemetery and copied down the following: